One thing I learned researching my family tree is names carry on from generation to generation. Knowing these family names helps make connections.

I found this on Ireland naming patterns. My family is far from Irish, but some of these patterns seem to ring true with African-American ancestry.

I was able to make these connections by names alone. But to prove it, I ordered marriage and death certificates. But it proved, at least in my family, the names of your ancestors can help you make family connections. 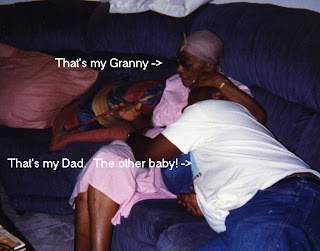 I got this idea from another person blogging on their genealogy. I’m a blogger but I guess it never occurred to me to blog on my research til now. Thanks to Taneya for inspiring this even though you didn’t know it.

This is my great-grandmother Bessie Lowry (B: 12 Feb 1911, D: 3 May 1998). She passed away on May 3, 1998. Just 12 days before my daughter was born. Since then I have been interested in my family tree. However, I didn’t start researching it til 2006. Then I really got addicted in 2007 when I got a ‘picture’ book my great aunt did. The book didn’t have a family tree. Just pictures and names. I would ask my grandmother who they were and she had no clue. Just would say, ‘they’re your cousin, just don’t know how’.

My family is what you would call

double related as I think most African American families are if you go back far enough. See, my Great Grandmother Bessie Lowry and her older sister Rosa Lowry (B: 1895, D: 1958) married bothers. Bessie married Aaron Edward Spence (B: 1906, D: 1972) and Rosa married Enoch Spence (B: 1894, D: 1935). This has always been the family story. 2 sisters married 2 brothers. But, no one knew past that story. No one knew anything else. The sad part is that this is what happens in black families, no one really talks about their ancestors.

This is my purpose of the blog. To talk, document and keep record of my family tree, even if no one else will. I’ve dubbed myself as family historian.