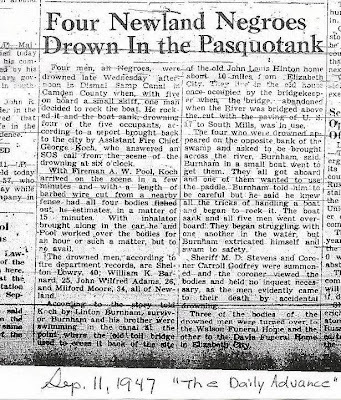 The library in Elizabeth City, more specifically, the genealogist at the library is awesome! She only works 1 day a week (Thursday). I called on Monday and she called me back Thursday morning. She said she found the article and I had a copy in my possession by that Saturday. All that for a mere $.10!

My hopes were correct and there was an article about the drowning of my uncle, Shelton Lowry. The 4 people that I found on Ancestry that died on the same name were the 4 men in the boat that day. The article also gives me the name of the one survivor. What a great find!

“Four men, all Negroes, were drowned late Wednesday afternoon in Dismal Swamp canal in Camden County when, with five on bard a small skiff, on man decided to rock the boat. He rocked it and the boat sank: drowning four of the five occupants, according to a report brought back to the city by Assistant Fire Chief George Koch, who answered an SOS call from the scene of the drowning at six o’clock. With fireman A. W. Pool, Koch arrived on the scene in a few minutes and with a length of barbed wire curt from a nearby fence had all four bodies fished out; he estimates, in a matter of 15 minutes. With inhalator brought along in the car he and Pool worked over the bodies for an hour or such a matter, but to no avail.

The downed men according to the fire department records are Shelton Lowry, 40; William K. Barnard, 25, John Wilfred Adams, 26, and Milford Moore, 34 all of Newland.

According to the story told Koch by Linton Burnham, survivor Burnham and his brother were swimming in the canal at the point where the old toll bridge used to cross back of the site of the old John Louis Hinton home about 10 miles from Elizabeth City. They live in the old house once occupied by the bridge keeper when the bridge, abandoned when the river was bridged above the cut with paving of U.S. 17 to South Mills, was in use.

The four who were drowned appeared on the opposite bank of the swamp and asked to be brought across the river, Burnham said. Burnham in a small boat went to get them. They all got aboard and one of them wanted to use the paddle. Burnham told him to be careful but he said he knew all the tricks of handling a boat and began to rock it. The boat sand and all five men went overboard. They began struggling with one another in the water; but Burnham extricated himself and swam to safety.

Sheriff M.D. Stevens and Coroner Carroll Godfrey were summoned and the coroner viewed the bodies and held no inquest necessary as the men evidently came to their death by accidental drowning.

Three of the bodies of the drowned men were turned over to the Walson Funeral Home and the other to the Davis Funeral Home in Elizabeth City.”

Genealogy is a genuine obsession of mine. My family nor friends quite understand it; however, they all think I should do it professionally. I don’t think I’m there yet. I love sharing my recent ‘finds’ with my family. More than likely, they have no clue whom I’m talking about and constantly get confused about which Aaron Edward Spence I’m referring too or who exactly was William Lowry, etc. But for me, explaining it is easy. I have these ancestors, my family, memorized. I can tell you who had a half sister, how the Ferebee surname got into our tree, what year my 3rd great grandfather passed away, etc. These are my family.

One of the most interesting facts that I found is a relative shared the same birthday as I. He’s the son of Shelton Lowry (Brother to Bessie Lowry-my great grandmother). He was born 11 Mar 1928. Sure there is 50 years difference between our births, but I think it’s awesome that a relative and I share the same b-day and I don’t even know him.

I intend on writing the library in Elizabeth City, NC (which covers several counties in northeastern NC) to see if they can pull an article about Shelton’s drowning. Another great aunt of mine told me that all in the boat died and even gave me the name of the person that rocked the boat. However, the problem that I have is, if everyone died, how did they get the story about rocking the boat and Shelton saying ‘Don’t rock the boat because I can’t swim’? Another tidbit she gave me was that Shelton may have died of a heart attack because he was so frightened about drowning. She said her sister told her that there was no water in his lungs. She didn’t know how true that was but I told her I’d order his death certificate and see what it says.

The facts I got from her were:

I found record for 4 people that died on 10 Sept 1947 in Camden County, NC. I will be ordering these death certificates.

I would think that if so many people died in a drowning in a little city like South Mills, it may be in the papers.