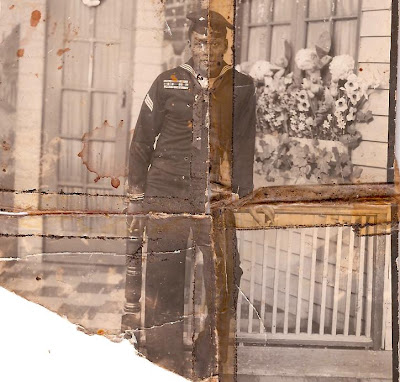 This is George Washington Bolden/Bowden/Baldwin. Excuse the variation of the last name, my grandmother could never tell me what it really was.

He is my paternal grandfather. Neither I nor my father has ever met him. My dad joined the navy for 2 reasons; because he was drafted and he wanted to find his father. My grandmother has never really given much info about this man and I’m not to sure why. But my father and I would love to know who he is.

What my grandmother has told me:

What my great aunt (my grandmother’s sister) has told me:

What I’ve been able to determine:

What the distant cousin has told me:

My father is the oldest of all her children and the only one with a different father. My grandmothers 1st husband took the picture when my dad was young and tore it up. This is the only picture we have of him. I intend on getting the picture restored. I sent it off once, however the picture that came back looked HORRIBLE! It didn’t even resemble this.

My father was raised by his maternal grandparents, Aaron Edward and Bessie Spence and on several documents he’s listed Aaron Edward Spence as his father.

Now what? It’s not like the Navy enlistment records are available online. So, how can I locate him???