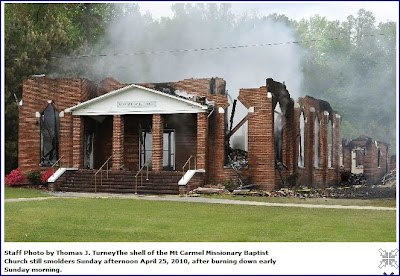 Today, a fire destroyed a 147 year old church in Elizabeth City.  This church was the home church of my family for many years and possibly had records related to my family research.  It’s sad to know that information and history may have been lost thru this fire.  Many ancestors were baptized, married and laid to rest in this church.

No one was injured in this early morning fire.  However, the church building appears to be a total loss.

Fire destroyed a 147-year-old church in the Newland community of Pasquotank County early Sunday morning.
Fire officials weren’t sure what sparked the blaze that completely gutted Mt. Carmel Missionary Baptist Church on U.S. Highway 158. The Elizabeth City Fire Marshal’s Office is investigating.
Robbie Whitehead, chief of the Newland Volunteer Fire Department, said passers-by notified emergency dispatchers about the blaze about 4 a.m. Sunday.
By the time firefighters arrived a short time later, the church was fully engulfed in flames, Whitehead said.
The Newland VFD, joined by firefighters from the South Mills Volunteer Fire Department and the city of Elizabeth City, battled the flames for more than an hour, bringing the fire under control about 5:30 a.m. Approximately 50 firefighters responded, Whitehead said.
By noon Sunday, all that remained of the brick church was a smoking hulk. The church’s menu-board sign announcing Sunday services and a gold-painted bell, both of which sit in front of the church, were not damaged.
Right now, fire officials don’t have any idea how the fire started or where in the church the blaze began.
“When (a fire) becomes fully involved, it’s hard to tell that at this point, Whitehead said.
Whitehead said firefighters had spoken to several of the church’s deacons, and none had any idea how the fire might have started. Church officials told Whitehead that parts of the church were at least 147 years old.
There is nothing right now to suggest the fire had suspicious origins, Whitehead said.
“Right now the investigation is going on,” he said.
Fire investigators from the Elizabeth City Fire Marshal’s Office visited the fire scene earlier Sunday and are expected to continue their investigation today, Whitehead said.

6 Replies to “Fire of Home Church”