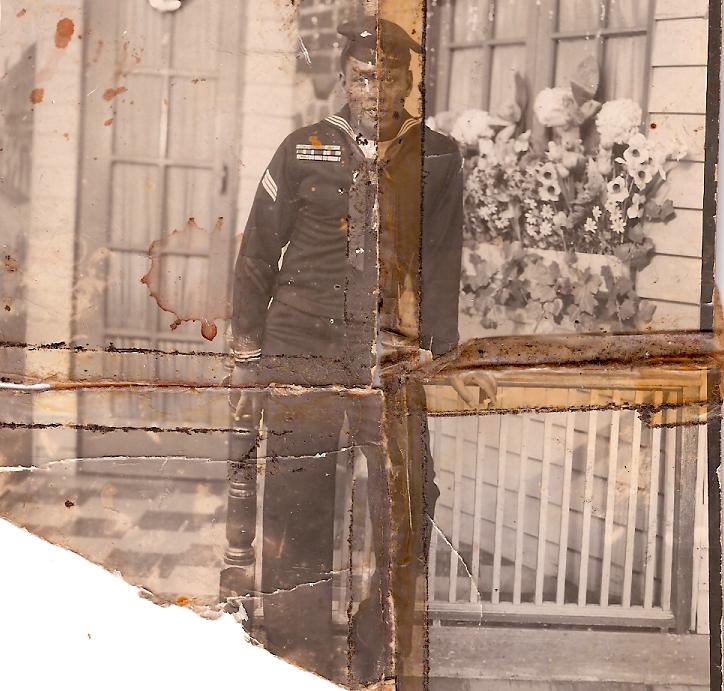 Thank you Karen SOOO much for your comment. I’m reposting the comment because this is information anyone searching for long lost military relatives can use!!!

From what little information you have about his movements in the Navy, here is a long shot for you. It might be difficult to find these sources, but you might try libraries and used book stores. Squadrons and ships and shore units often will publish yearbooks with photos and names of the personnel assigned to that unit. Maybe someone in Norfolk (I recommend RAOGK – Random Acts of Genealogical Kindness, http://www.raogk.org, and look in their directory for someone in Norfolk). You might get lucky.

I just wish I could see his left arm in the photo because his rating insignia (what his duty was in the Navy) would be there. He does appear to have a lot of medals. The really unfortunate thing is that he doesn’t seem to have a name tag on his uniform. If only he’d worn a name tag, that might have helped you a lot, if you could get the picture enlarged with some clarity. At that, you might try, because the name of his ship might be on the band of his cap! Something is written there, but I cannot make it out.

One thing you might think of trying is to go to the armed services website Military.com (http://www.military.com), and on the left-hand side of that home page, click on Navy. You will have to register, but it is free. Post the photograph on the site, if you can, and see if anyone recognizes your grandfather! That, too, is a long shot, but there could be some old retirees who just might remember.

You could try to get his service record with the sketchy information you have. It would be difficult. I would recommend that you call the National Personnel Records Center in St. Louis, which is where his record would be kept. Their phone number is 314-801-0800. I have found NARA and NPRC personnel to be very helpful. Explain your situation to them, and how much this means to you, and see if they can find his record just with the name — even though they’d have to sift through variations, in your case.

Much good luck, and I’m going to follow your blog to see if you have any luck with this.

Karen – I’ve started working on this. I did fill out a form and sent it to the National Personal Office. Since an immediate descendent had to do it, I had my dad send it to them. They replied back saying that we need a SSN in order to get information. But, I’m going to call and see if there is something else I can do.

Thanks again. This has given me some hope in finding info on my grandfather.

One Reply to “Plan of Action from Karen”